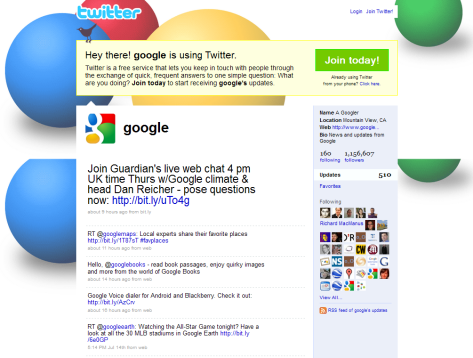 Imagine Google with just seven Twitter Followers. Imagine the official Twitter account with just one follower… Well, you don’t need to imagine, because we’re going on a journey back through time to revisit those very scenarios, in a pictorial history of Twitter’s rise to micro-blogging stardom.

We know that Twitter started out as a functioning project in March 2006. Indeed, the earliest surviving Tweet, made before the site’s official launch and bearing the status number 20, is still live on the site. Founder Jack Dorsey’s “just setting up my twttr” message, posted on 21st March 2006, is embedded below…

just setting up my twttr

Twitter – typically referred to as an app rather than a website back in 2006 and 2007 – was a pretty instant hit with the young and trendy. But when did it explode into the wider market and ingrain itself into modern culture? Well, I thought that a great way to pinpoint the moment of Twitter’s catapult-sling into the mainstream would be to look back at some obscure history relating to a mightily important Twitter account. What better account to examine for such purpose than @google?…

Okay, so if you’ve looked at Google’s current, verified Twitter account, you’ll know it was created on 10th February 2009. That in itself tells us something about Twitter’s rise to dominance. But what was happening with the @google username before that moment? Let’s find out…

The notion of @google having a mere 7 followers on Twitter is unthinkable today. But if we hop back to March 2007, we see exactly that scenario. No updates, no favourites, and just 7 followers – this was clearly a ‘parked’ account, reserving the @google username for future use.

Through 2007, Twitter was characterised as a cool, fun phone app, mainly used by under-25s. However, its growth and rapidly extending reach caught the interest of business users. Through 2008, business-orientated writers were introducing the micro-blogging environment to an older and more commercially-focused group, with articles such as What is Twitter?

But it was the cusp of 2009 before Twitter really moved into the domain it occupies today. And it’s at the beginning of that year where we re-unite with the @google Twitter account. By the time of the January 2009 capture above, @google has run up a total 534 followers, but is still parked. That will very soon change.

It’s now the following month (February 2009), and we’re seeing Google’s first day as an active presence on Twitter. This is now a different account, so there’s been a username switch. But look at the massive rise in followers.

Just five months later, it’s now July 2009, and look at what’s happened to the follower stat in the short interim. Now showing an audience of well over a million, @google is heading skyward. But this also says a great deal about the way Twitter was leaving behind mere buzz, and turning into an explosion.

Another year and a half on, in August 2012, the following has basically doubled. 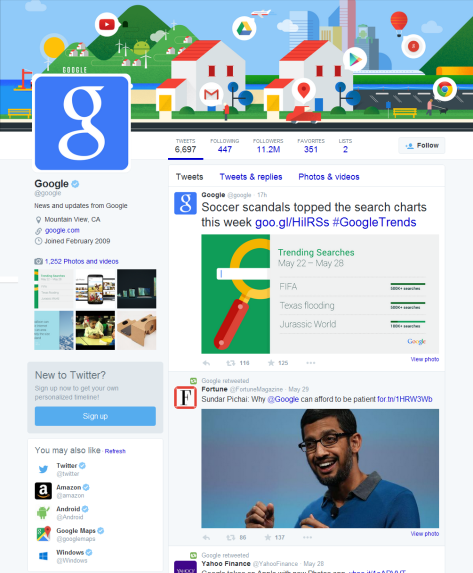 And in the period of nearly three years to late spring 2015, the followers total has more than doubled again. It’s now 11.2 million. Above we see how Google’s account looks today.

So it’s fairly evident that 2009 was the year Twitter left its cult status behind and moved into the mainstream. And if you look at the join dates on the range of Twitter accounts you run into, you notice that 2009 is very common, but earlier dates are far less often encountered. The point at which Google could no longer sit dormant on Twitter, was the moment the site truly arrived.