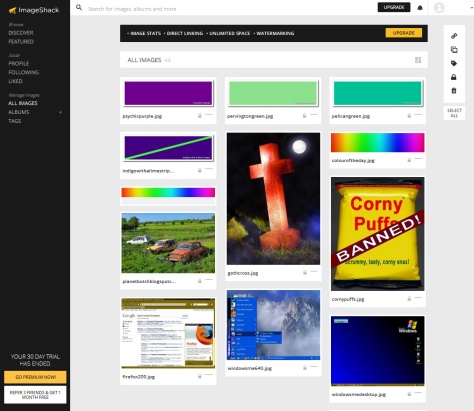 If you missed Part 1 of this history, you can find it via the following link…

It was in the wake of Photobucket’s arrival that ventures such as ImageShack and ImageVenue followed – also offering free hotlinking to big sharing platforms (i.e. the forums). Indeed, 2004 brought a wave of these new, free, image publishing hosts into being. ImageShack became a huge player, but it was Flickr, born in mid February 2004, that really took things to the next level…

Flickr joined up the dots in the big picture, taking pieces of the existing jigsaw puzzle and assembling them into one dedicated photo sharing package. It wasn’t really a third party host, like Photobucket, and it wasn’t really a glorified organiser with added peer-to-peer functions, like Picasa. Flickr was a controllable, self-sufficient means to share photos up to whatever level the user desired – be that privately with family, or openly published on the Internet. It incorporated some of the desirabilities of the paid service smugmug, but moved them into a more widely social area. Flickr did also incorporate the instant messaging idea which had created a buzz for Picasa, but again, that was only one of many facets.

The appeal of Flickr was in its completeness. And as the site grew, and its reach expanded, its social features became evermore potent.

Flickr was RSS driven, and it combined the inclusiveness of that with a tagging feature for easy search. Seems obvious now, but tagging with keywords was highly unusual before the middle of the noughties, and of the big sites, only del.icio.us was really known for it.

Flickr was considered part of the original Web 2.0 trend, and was described as “The Friendster of Photo Sites”. The interactive Flickr environment allowed users to add information/commentary not only to their own images, but also to other people’s. The site was also considered to be harnessing greater levels of desktop app-style functionality on the website’s side of the divide. Another massively important clincher for Flickr’s world-leader status was its sensitivity with advertising. Where other sites were bombarding users with annoying flash ads, Flickr adopted a Google-like approach and was very subtle and well-behaved.

Gaining great popularity in the early to mid noughties, blogs were always going to be an important compontent in online photo sharing, providing as they did another means for ordinary people to publish their images for free. In 2004 and 2005, Blogger (.blogspot) was using the dedicated image host Picasa to facilitate image display within users’ blog posts. But when WordPress.com went live in the second half of 2005, it came with its own image hosting.

By default, blogs displayed images as little more than thumbnails in the mid noughties. Even going into 2006, the majority of Internet users were still not using broadband, so aside from the image hosts’ own bandwidth considerations, blog visitors would probably not be wanting to encounter a page crammed with numerous full-sized images. At the time, most blog posts did not feature any images at all, and some bloggers who did include images preferred to hotlink from third party hosts (such as Flickr or Photobucket) rather than use the blog’s own facilities. This was because the blogs’ own maximum upload capacities were relatively low. WordPress.com had a maximum of just 50MB in 2006 and 2007.

The image above shows how early WordPress.com blog posts would typically look, with images displaying at very small size.

The instability of photo hosting options continued through the second half of the 2000s. Particularly in the realm of hotlink services, host sites would come and go, take random time-out periods (removing loads of hotlinked images from forums in the process), and randomly decide to block hotlinks without warning.

And it still wasn’t easy to find a free solution that gave the user complete freedom to post indiscriminately either. Almost all providers had retained restrictive ceilings on upload capacity for free users. When WordPress.com upped its limit to 3GB per blog in January 2008, that capacity was way ahead of the free competition. Blogger (still hosting via Picasa) was limited to 1GB – and that was per account, not per blog. Flickr was capped at 300MB per month for free users. Photobucket had a 1GB free storage limit, with an additional monthly bandwidth cap of 25GB and a max image size of 1024 x 768 pixels. ImageShack had an hourly bandwidth cap and limited upload file size, etc…

As had always been the case, as soon as you found a host without these restrictions (almost invariably a newbie), you’d be very highly sceptical about its long term prospects, and you’d probably be right.

From 2007, Tumblr spearheaded a breed of image sharing sites which tacitly encouraged photo re-posting (basically theft in many cases), as opposed to the publication of original content. Tumblr was built around a standard blogging platform, which had SEO features omitted in what appeared to be a bid to keep posts (Photo Posts in particular) within the registered community and out of the wider world’s sight. Technically, all Tumblr posts could be indexed by Google, but post titles (a massively important SEO component) were not available in Photo Posts, and many Tumblr blog themes did not place adequate header tags around the Text Post titles, making it much harder for the posts to rank.

One ‘advantage’ of this would be that photographers whose copyright-protected work had been stolen by Tumblr users and posted uncredited, would be less likely to find out and go after Tumblr with DMCA removal notices. Another was that Tumblr users would have to work harder (i.e. keep posting) to maintain attention, meaning they’d remain more active on the site.

Pinterest, which followed in 2010, took a different approach to re-posting existing images, describing itself as a visual bookmarking site, and operating as an even more closed community than Tumblr.

In the second half of the noughties, social media and web 2.0 was highlighting the online public’s greatest vulnerability: ego. People need praise – well, most do. Many, indeed, are so desperate to get it that they’ll go to extraordinary lengths, and overlook some pretty invasive privacy arrangements in the process.

One of the things that blogging platforms, social networks and the likes of Flickr were highlighting, was that people could very easily be coerced into feigning interest in others, or the work of others, if it would lead to them getting attention, praise and ‘online status’ for themselves. This was hugely important in generating activity on the sites. A user might visit the site only once to post a photo, but another 10 to 20 times – perhaps more – to find out what other users had said about it. Then they might visit many times more to comment on other people’s work, primarily with the intention of prompting reciprocation. The route to heavy site use was not in the upload facility – it was in the provisions for interactivity and mutual ego massage. This would see the hotlinking sites progressively eclipsed by facilities built around Web 2.0 features.

In the earlier days of social media, the hotlinking sites would do well, and in fact ride on the back of most of the social sites’ uploading inadequacies. Twitpic, for example, was launched (in 2008) specifically to host images for Twitter, which did not not, in the noughties, have its own native image upload function for tweets. More image hosting brands subsequently emerged to capitalise on Twitter’s lack of a native feature. 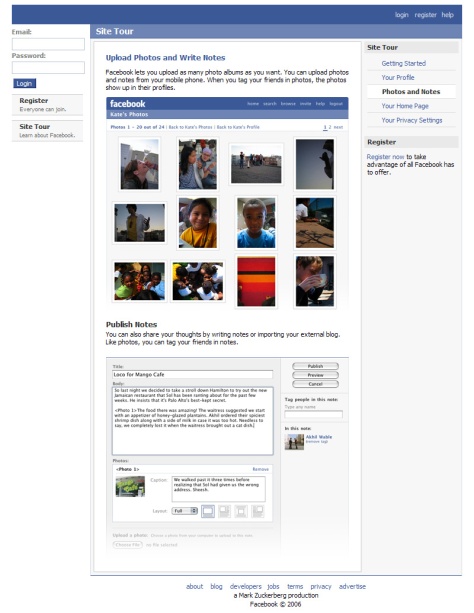 But other social media sites did offer native image uploading. For a few years from spring 2004, MySpace was the leader in social networking, but in April 2008, Facebook subordinated MySpace to become the most used social site. Both Facebook and MySpace offered native photo uploading without the need to hotlink from third parties. As you can see above, Facebook’s photo upload facility was important enough to headline the third page of the Site Tour after FB first went fully public in 2006.

FROM HOTLINKING TO SOCIAL 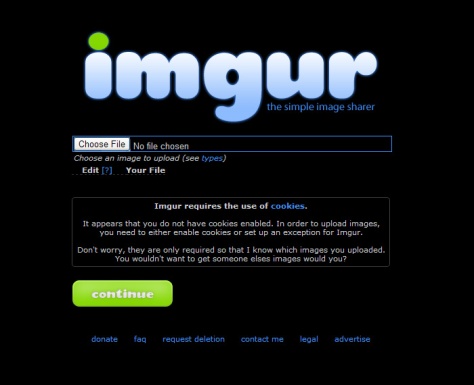 imgur is an interesting example of a photo sharing site that started as a simple hotlinking resource, and used an association with the massive, dedicated social platform Reddit to gain a footing of its own as a self-sufficient environment. imgur’s original homepage (circa 2009) is shown above – clearly a very typical, no-frills hotlink upload mechanism.

imgur implemented a gallery feature, which would highlight the site’s most viral images, as shared (via hotlink) elsewhere online. This, in addition to other progressive features, was a means of keeping users’ attention on imgur after upload. Then, in late October 2012, imgur effectively ‘imported’ the vast userbase it had built through serving existing social media, by giving the gallery a direct upload feature, increasing its internal motivations, etc. It’s a point of debate whether imgur really set out to serve purely as a hotlinking resource as it claimed, and then adapted to better integrate with what users might want, or whether it set out to build a social media resource from the start, and deliberately courted Reddit as a means of generating an enormous userbase.

Conversely, 500px (also established in 2009) set itself up as a socially driven photo sharing site from the start. 500px is aimed at serious and very good photographers, and its features prompt users to compete not just for attention, but also for sales. It’s beset by the typical pitfalls of social sharing – feigned/fake interest, copycat behaviour, etc. This is a problem that’s gripped all social sites to a greater or lesser extent, including Twitter, blogging platforms like WordPress, and of course Flickr. For non-creatives, it’s no great issue, but for creative users, fake interest can be more destructive. Motivation is one thing, but if users are investing their time or money based on false praise, they can face considerable bitterness once the bubble bursts.

As the noughties drew to a close, photo sharing now needed to be a lot more than just a publishing tool. And even the socially-aware businesses of the late noughties were very soon going to become ‘old hat’, as smartphones enabled a much faster, more ‘live’ and more Orwellian brand of photo sharing…

That’s where we’ll be going in Part 3, which will see big names of the past struggling to survive as the story heads for the present day. 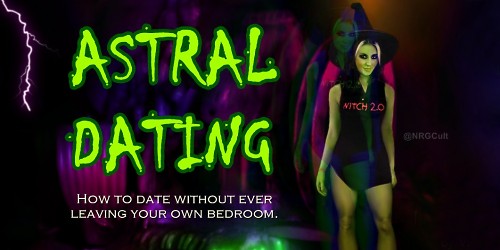